Suzy
Annoying Little Neighbor Girl (by Johnny)
What's-Her-Face (by Johnny)
Small Fry (supervillain codename, codename in "A Walk On The Stupid Side")

Little Suzy (or simply known as Suzy) is an intelligent young red-headed girl who is very persistent and talkative. She is Johnny Bravo's neighbor (with her name often forgotten by Johnny) and the tritagonist of the series.

In Seasons 2-3, Suzy wears the same outfit, but her head is less round than before.

In addition to her intelligence, Suzy is shown to be polite and usually more sycophantic than Johnny. She is high-spirited and rarely angry or sad, especially in the first and last seasons of the series.

Suzy's main interests are learning, reading, and dolls. She is also a huge fan of Gabbity Abby, owning every doll and other merchandise made for the franchise, including a set of 24 CD-ROM disks. However, like most children, Suzy's interest in certain things (ex. the doll from "Noir Johnny") can fade quickly because of her moving onto something else.

Suzy finds a lot of fun in bothering Johnny, often trying to get him to play with her whenever she feels bored or randomly visits the Bravo house. Because Johnny is one of the few adults Suzy knows who cannot hold a job (thus having a lot of free time), she occasionally uses him as an adult chaperone, convincing him to take her to places such as a live recording of the show Aunt Katie's Farm, a toy store, or a magic show.

In the first and fourth seasons, Suzy is shown to have a puppy dog crush on Johnny, which makes matters worse for him, as she seems unaffected by his rejections. This crush is most evident in "My Fair Dork", where Suzy wants Johnny to be her chaperone to the second grade dance, which Johnny declines. When he takes note of a geeky boy with a crush on her, Johnny decides to coach him on how to impress girls so Suzy can take him instead.

Despite finding her annoying, Johnny does feel guilty when he makes Suzy cry in "Cookie Crisis", so he finally gives in and buys cookies from her.

After the show's retooling, Suzy's crush on Johnny seemed to be written out, or at least less intense than previous episodes. Instead, Suzy considers him to be a close friend, and also comes across as more of a younger sister figure to him. Suzy is sometimes embarrassed or frustrated by things Johnny does, especially when he goes too far, yet still values him as a friend and wants to help him when she can. She is also often plain-spoken about Johnny's flaws. One example is "A Cake Too Far", where an irritated Johnny asks Suzy if she thinks he's stupid, to which she sighs and replies "Stupid is such a strong word."

Although Johnny finds Suzy annoying, similarly to how he views Carl, he shows guilt when he upsets her in "Johnny's Guardian Angel" and "Tooth Or Consequences". In the latter, Johnny sheds a tear upon seeing that Suzy is miserable and tries to cheer her up by dressing as the tooth fairy (whom he just told her wasn't real) and granting her wishes. Suzy takes advantage of this, seeing right through his disguise, making him take her to an ice cream parlor and a petting zoo. After the animals break free, Johnny gets arrested, and Suzy tries to stop the officer, revealing she knew it was him all along. Johnny is shocked, then guesses he is "pretty lousy at cheering people up." Suzy disagrees, saying it made her happy knowing he cared enough to try.

In "Johnny's Guardian Angel", in a reality where Johnny was never born, Suzy is shown to be a young supervillain of sorts threatening to destroy the city of Cleveland if her demands aren't met. This likely implies that Johnny keeps her at bay from boredom and using her intelligence in extreme ways to get attention from other adults.

Suzy and Bunny Bravo interact often outside of Johnny-related matters as the result of Bunny being in charge of certain groups and teams Suzy is a part of, such as an all-girls softball team called Mama's Maulers and occasionally her Buttercup Scouts troop.

Another friend of Suzy's is Carl Chryniszzswics. When Suzy was planning on filming a documentary on the Hansel And Gretel witch, Carl was the camera man. In "The Color Of Mustard", the two are also seen about to play a game of badminton before Johnny joins in and defeats them, much to their dismay.

Suzy has had a few crushes, such as one on celebrity Leonardo DiCaprio and a temporary one on her classmate Smelly Raymond, who was attacking her and her friends with water balloons in "Balloon Platoon". Raymond has a huge crush on her, but she is otherwise disinterested.

In the future timeline shown in "The Unsinkable Johnny Bravo", Suzy is the head of a real estate conglomerate and has a photograph labelled 'On Her Trike' of presumably her daughter, wearing her childhood outfit and sitting on an oversized tricycle. 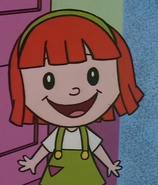 Suzy as she appears in the first season.

Suzy as a Buttercup scout.

Suzy, Johnny, and Carl in the house of the Hansel and Gretel witch. 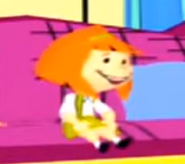 Suzy in "Johnny Bravo in The Hukka-Mega-Mighty-Ultra-Extreme Date-O-Rama!" for the PS2.
Add a photo to this gallery
Retrieved from "https://johnnybravo.fandom.com/wiki/Little_Suzy?oldid=11822"
Community content is available under CC-BY-SA unless otherwise noted.