View source
watch 01:36
We're Getting Mutants in the MCU - The Loop
Do you like this video?
Play Sound

Johnny Bravo is the titular main protagonist of the series. His shallow, boorish, and dim-witted traits lead to an incorrigible inability to attract women, as well as getting beaten up by them or just about anyone, becoming a running gag throughout the series.

Johnny wears a black shirt, blue jeans, black shoes, gelled up blonde hair, and his signature sunglasses. He has a very muscular build, which is often exaggerated in size. As seen in "Bravo Dooby-Doo", Johnny has black, dotted eyes, similar to the other humans.

Johnny Bravo is an extremely dim-witted, ill-mannered and inconsiderate beefcake. He's very full of himself, constantly checking mirrors and flexing his muscles in front of women. During a conversation with women, Johnny will always try to find a way to turn the conversation around so that they are talking about him in an effort to make the girl realize his positive traits, although this effort to do so exemplifies him as a narcissist. Johnny also naively and faultily believes that all women want him, even when they express the fact that they are uninterested. Because of this, Johnny has the courage to talk to any woman without hesitation, and even kisses one upon meeting her in the pilot. Johnny also has no sense of personal space, as he often rushes at the women and bends them backward while flirting with them, causing most of them to hit him out of disgust. He even occasionally flirts with women who are already in a relationship, going as far as to suggest cheating without any fear of repercussions.

Another attribute Johnny possesses is extreme determination, as he will go through many tasks, even life-threatening ones, to win a girl's heart, although this most often results in failure. These failures are due to Johnny's incompetence and his belief that good looks and macho actions are enough to win one's heart. Because of his shallow views on dating, Johnny usually treats potential partners like "nagging housewife" types or ignores their needs in favor of his own.

Despite his muscular stature, he is easily beaten up by the majority of creatures and people he encounters. This could be due to a variety of reasons, including the high concentration of toxins and other substances in his body.[3] Johnny's diet consists of mostly junk food and meat (sometimes consumed in bizarrely unhealthy ways, like drinking cups of bacon grease), not to mention meals others may find disgusting, such as dishes from Pops' Moon Palace. His interest in such food likely originated from being fed certain meals by his mother, Bunny.

Johnny is presented to be not too intelligent, totally lacking common sense and general knowledge. He can also be interpreted as a male representation of the "dumb blonde" stereotype. His level of intelligence and immaturity can vary from time to time, occasionally depicted in more extreme ways than usual. He is also very gullible and easy to prank, being known as a "bonehead" ever since he was a child.[4] According to an anthropologist, he is far dumber than a monkey.[5] Despite this, Johnny often talks in a snarky, dramatic manner and uses "big" words from time to time. Overall, Johnny seems to be more knowledgeable about his own interests than academics or nearly anything he deems nerdy. For instance, Johnny has encyclopedic knowledge about Jerky Jake's brand beef jerky.[6] He also has a lot of knowledge about Mr. Kevin's Hair Gel due to taking the factory tour a large number of times.[7]

Johnny is the "biggest fan" of action TV star Squint Ringo, owning a life-time membership to his fanclub and a collection of merchandise. He claims to know all his moves, not to mention uses them in order to cut in line and be the last to get Squint's autobiography, signed by the star himself.[8] He then became a stuntman for Squint for a short time, and once tried stealing prune spread from Little Suzy so he could get Squint Ringo tungsten knuckles. Johnny is also a big fan of nachos, and Pops' chili. He will do anything to get these foods.[9][10]

Johnny has notably bad people skills, disloyalty, and various other issues that lead to him having very few friends. When Johnny finds someone annoying, he is often rude to them, although he may care about their feelings in secret. For example, when he makes Suzy particularly upset, he feels guilty and wants to fix the problem he caused. While he may not want to admit it, he sees her and Carl as the closest thing to friends and relies on them for help at times. Also, when he misunderstands that Carl is dying in "Carl Be Not Proud", he greatly regrets his behavior and promises to be a better friend for a short time. Despite this, Johnny is able to open up to people who he sees as parental figures, such as Bunny and Pops.

Johnny values his macho, "bad boy" lifestyle to the point of which he judges others for childish behaviors, such as playing with dolls or roleplaying, when he himself does the same. Johnny also usually does said activities in public, hoping that no one will notice his hypocrisy, such as Suzy or Carl. In such instances, he will often try and defend himself or make excuses to save his imaginary reputation.

In "Freudian Dip", after having numerous nightmares about a monster, Johnny gets a costly therapy session from Suzy to find the root of the issue. Quickly, he reveals his biggest insecurities in a comedic fashion:

Suzy: (talking through doll) Why are you so afraid, Johnny?
Johnny: Well, I-I'm afraid to love, so when people try to get close, I push them away, and— (screams) Talking doll!
Suzy: Dolls sometimes help us say things we can't say ourselves. Here, try it.
Johnny: Well, alright. (talking through doll) Poor Johnny, he's lonely and has problems with intimacy.
Johnny: (to doll) Quiet! Don't tell her that!

These insecurities are proven throughout the series by Johnny's inexperience with dating, how he pushes his close friends away, and how he avoids committing to a long-term romantic relationship (thus why he is open to the idea of cheating). Through the doll, Johnny also shows some self-awareness about his childish nature, ashamed of secretly sucking his thumb and kissing his pillow, pretending it is a girl. He claims he wants everyone to think he is in control, yet thinks of himself as a "little baby" for panicking about "monsters" at night.

Overall, Johnny can be very ignorant or judgmental toward anything he does not understand, such as people he sees as freaks, geeks, or otherwise odd. He also has a cynical attitude toward those who are overly nice or positive, most notably when Sister Sara once tried to help improve his behavior. After Sara said she was only interested in nice, noble men, Johnny agreed to become nicer to meet her standards. When he fails, she gives him more chances, which he views as pigheaded of her. Sara soon snaps entirely, realizing she "wasted her life" trying to help people like Johnny, beating him up and leaving to join a heavy metal rock band.[11]

When Johnny was a baby, Bunny Bravo used to dress him in a bunny suit. When he would not eat, she would distract him by pointing out something in the opposite direction and sticking the food into his mouth. She once fed him a slice of baked ham instead of baby food and left him in his crib (turning the lights off) when she was going to watch her programs. This caused him to imagine his toys as monsters, giving him a fear of the dark that Johnny still retains in adulthood.[12] However, in "Look Who's Drooling", Bunny brings a now-infant Johnny to a daycare, implying she used to when she got busy.

In certain episodes, Johnny is shown to have had his personality and interest in girls since he was a baby. In "Blanky Hanky Panky", a flashback reveals Johnny had his first kiss at a young age, the duo both being infants.

In "T Is For Trouble", a young Johnny is shown to be a huge fan of celebrity Mr. T, who he wrote a letter to asking if he could teach him how to confront his bully, Little Ricky Simmons.

During elementary school, Johnny was bullied by Stinky Brownstein.[4] She would pull various pranks on him, such as once telling him it was "Cross-Dressing Day" at school, convincing him a frozen flagpole was made of candy, and pulling his pants down on the day of their graduation.

During unspecified school years, Johnny was short and acne-ridden. Carl would bully Johnny, asking for his lunch money because he was bigger and older than him by three weeks.[12]

During high school, Johnny was very scrawny, weighing at 98 pounds with a mullet.[13] He had a crush on Sandy Baker, the prettiest and nicest girl in school. One day, Johnny was thrown into a trash can by a bully named Trent. Sandy intervened and made him apologize to Johnny for picking on guys without huge muscles. She then helped Johnny out, but accidentally knocked him over. Sandy apologized, and the two become acquainted with each other. Realizing they were in the same Spanish class, Sandy offered to come over and study with Johnny. That night, Johnny asked Sandy to the prom; she cried and happily said yes.

Knowing that he was going to go to prom with Sandy, Johnny decided that she deserved to go with a "hunkin' stud". Inspired by a comic book, Johnny ordered workout equipment from Flex Bigarms. He initially struggled, but was eventually able to get the hang of it. After weeks of exercising and drinking muscle powder to ensure he would obtain a large build fast, Johnny became the strong man he is today. On prom night, Johnny showed up at Sandy's house, which appeared empty. He was heartbroken, assuming he got stood up. Johnny wanted to talk to her at school the next day, but he didn't see her again. Years later, Sandy explained that she had actually told him she was moving away and that he must have forgotten.

The character is memorable for his incredibly fast movements (usually done while trying to impress women), which were accompanied by the loud crack of a whip sound effect. A few of Johnny's catchphrases are "She digs me!", "Whoa, mama!", "Wiggy!" (often used positively or in response to something strange), "Let's motor!", and "Yeah, whatever."

Three running gags are Johnny saying "Mmm, (word)-y", breaking the fourth wall, and him being beaten up by women who reject him. Another running gag is Johnny's short attention span (ie. "Right, what did I say?"), as it is very, very easy for him to get side-tracked by a pretty woman or any random thought occupying his brain. 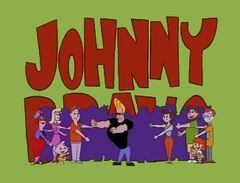 Click here for the full image gallery for Johnny.

Community content is available under CC-BY-SA unless otherwise noted.
Advertisement